Where are the Chibok Girls? Where are they lined with us as we gaze into the new year? Where are their shinning faces relieved from the torment after the hasty steps of government?

Where is my father? Shut down his eyes to the world stood still as life crept out. When are the passengers of Malaysian Airlines that disappeared early in the year? Where are the countless persons killed by the terrorists and the late applicants who wrote immigration exams? The lives lost to Ebola Outbreak; the ones killed by ISIS; the ones who strode in their prime but disappeared suddenly at the alternate realm.

To look back after the loss of our patriarch is to personalize the grief that comes after the death of a loved one. Countless people faced this moment, taking in punctuation at the temporal sojourn of man within this space. I have decided to write too little about 2014 as it will keep wrapping round the blanket of grief of my late father.

2014 disappears with a lot of people, hopes, fears and promises. To keep one’s breath is an attestation of Grace. I take solace in the continuous work of God in my exploits, His showered Grace on BudgIT and his firm hold on my family. There are too few words. I look forward to a 2015 with loud laughter when the stakes are strengthened, the tents are larger and also a year, that your good man finds a good lady and does the right thing, the altar.

Friend of the Year: Mariam Edun (for her good work in managing BudgIT finances)

New Friend of the Year: Adenike Ayaoba (the coolest buddy in the world who wakes me up with amazing pieces)

Book of  the Year : The Natural History of Innovation by Stephen Johnson

Facebook Friend of the Year: Chris Ogunlowo (for the beautiful articles that we shared in Pocket)

Tweep of the Year: @ChubaEzeks (His good work on Naijanomics and also the good knowledge shared)

Happiest Moment of the Year: Omidyar Network committment of $400,000 to BudgIT

Song of the Year:  The One That Never Comes – Asa

It is that time of the year when I seriously unwind, live somewhere in Ibadan, allow some white space into my life to really reflect on the choices of the year. In 2014, a lot of folks to look up to but I will do a short profile of three young men whose daily work greatly inspire me.

As an employer, of the critical things in severe need are individuals with deep expertise and talents. Hiring fresh graduates comes with a lot of training costs and most can’t neatly fit into the corporate environment. The tech ecosystem is even in a more severe contest with the best developers hired by leading companies and startups leaving others to endure the upcoming ones.

Iyin and his team at Andela are on an impact mission and are taking a bold step to train developers and engineers who lit up the Nigerian ecosystem. His work with Andela is rethinking systems of why we need to build a cluster of skilled personnel and Andela is raising skillset from zero to ten, a notch at a time. I have been to his office and I peer at ready faces who are ready to craft new lines of codes to build something amazing. Having raised over $3m, Andela is preparing Nigerians with the right skills to appear at the workplace, providing a glut of coders for civic and business good. His work with Jeremy is changing lives and at the age of 23, one is tempted to say maybe it’s just another “football age”. An amazing excellent personality using resources to correct gender gap in tech industry, surely  he is of now and the future.

He is a Dentist but with a broad civic mindset who have made amazing designs for EiENigeria, BudgIT and Ekiti State Government. He was BudgIT’s first infographic designer after I scribbled the first wack and proud ones. I always see in him that burning fire that needs to be applied to issues.

When Ebola Alert appeared, as a quick communication portal for the dreaded Ebola Virus Disease, I took a bow at his excellence. The speed of response, his civil approach, the sudden appearance of contact lines, website and mobile platforms lent credence to his smashing excellence. He changed lives retelling to the Nigerian citizens the issues around Ebola scourge Ebola virus infection has killed over 3,000 people  in 2014 (including 8 Nigerians). He effortlessly earns my huge respect for his selfless and invaluable previous work with BudgIT, his current drive towards Ebola communication with international partners and we are up to a great work in 2015 on the fund transparency.

Bakare Lawal is a person I decided to name “my friend for life”. Whatever great height I find him the future, honestly it will be of no surprises. 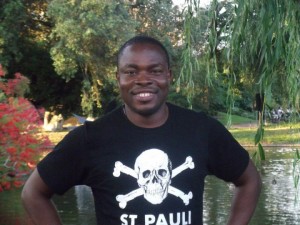 When he tweeted the issue of journalists gleefully collecting N50,000 transport money from Synagogue Church, scorn was poured upon him. They wanted an evidence. He gave them an evidence yet they still made him an object of ridicule in a society of low expectations. I read his  tweets –  that he wil relocate family, wary of the security of his young daughter and of the threat to his life. Nicholas Ibekwe is the Premium Times journalist whose revelation gave me exposed the weakeness of the media industry, more in haste for the brown envelopes and the press releases.

This mediocre attitude laced with sleaze (seen to them as a gift) is a burden to my spirit. I admire his courage, his sheer will to express himself, that 115 people who died in that church building deserve some sobriety and that the Church should give answers to the tough questions. Having not met him but with his inner strength to reveal the hypocrisy of the profession without empathy in a grieving moment, he more than deserves to be on this list.

Special thanks to Adenike Adediran who sends me daily articles that are strikingly amazing and  Seyi Taylor and Big Cabal team for their good work on Ebola Facts.